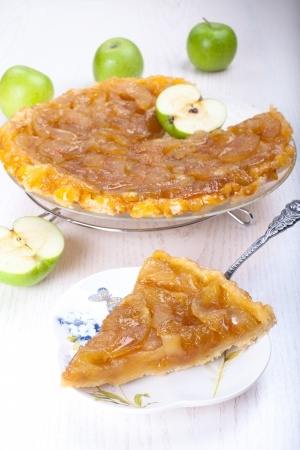 The “Tarte Tatin” was created unknowingly in the kitchen of the Hotel Tatin in Lamotte-Beuvron, France around 1880.

Stephine Tatin, the chef that night meant to make an apple pie. She prepared the apples leaving them to cook in butter and sugar for too long.

She then tried to rescue the dish, as the apples were burning, as she put the pastry base (pie crust) on top of the pan of apples, and then finished the cooking by putting the whole pan in the oven.

After baking the apple dessert and serving it to the hotel guests, she was surprised to find how much they loved the dessert.

A tarte tatin could be said to be an equivalent to an upside down cake. Like with this Apple Cinnamon Upside-Down Cake. Though it’s base is a cake batter, not pie pastry.

But this French dessert is actually a tart made upside down. The tart combines three basic flavors: apple, caramel (butter and sugar caramelizes while baking) and a buttery pie pastry.

Line the inside of a 9-inch spring-form pan with parchment paper.

Slice butter into small chunks and spread chunks evenly into the spring-form pan. Sprinkle with the sugar and arrange apple slices into an overlapping pattern over sugar layer.

Bake in preheated oven for 1 hour, until pastry is golden brown. Allow to cool slightly, then release sides of pan.

Place a large plate over pastry, then invert so apple layer is on top.

You can use the apple of your choice. This recipe employed Granny Smith apples. Though you can also use Braeburn apples of any apple that can hold its shape under high heat.

Read more here about What Apple To Use For Cooking & Baking

You love baked apples? Then you need to make this Baked Apples Apple Pie