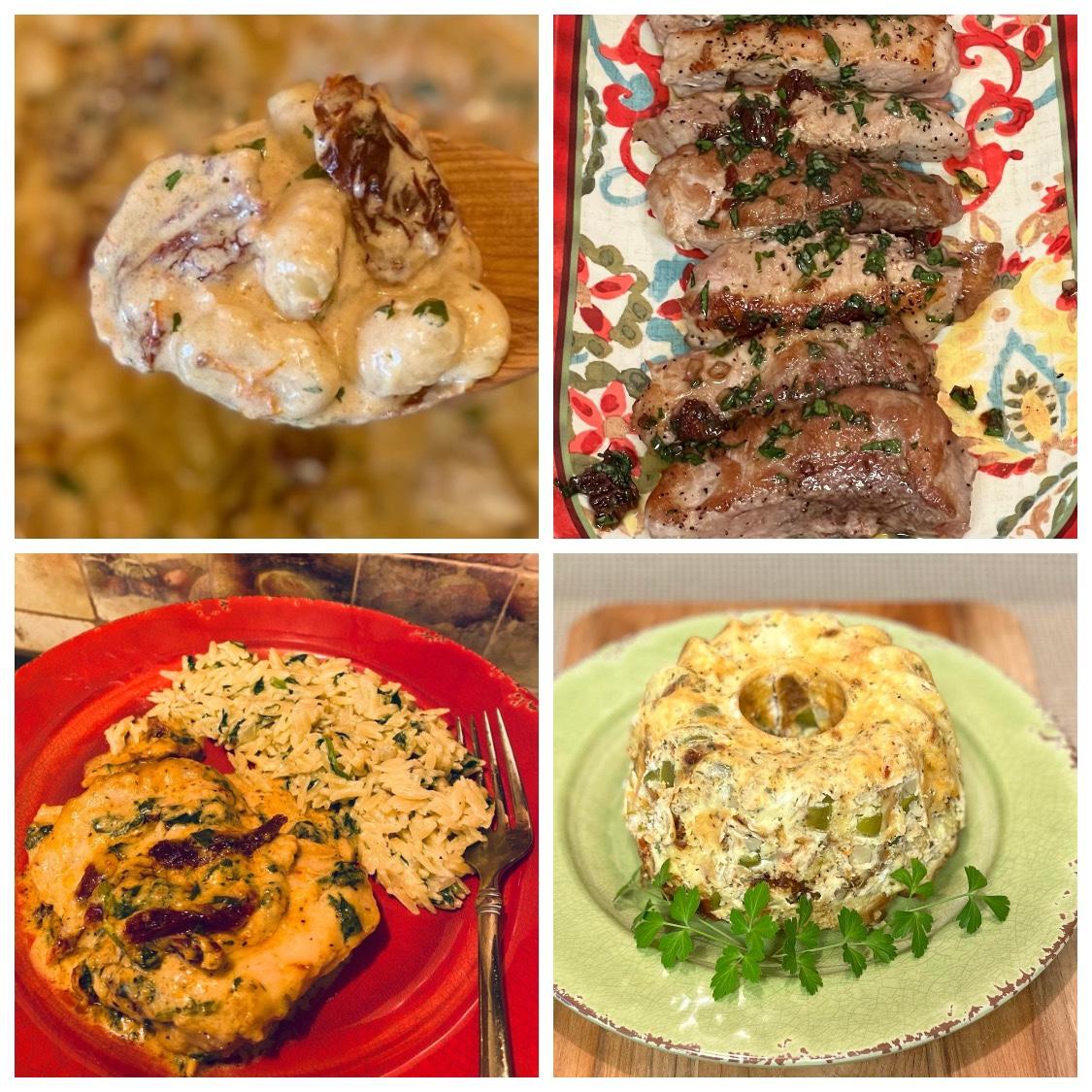 Tomatoes have always been associate with Italian cuisine, even though the tomato is not native to Italy.

Tomatoes came to Italy from the New World in the 1500s. According to L’italo Americano (an Italian magazine) the first mention of tomatoes in Italy dates to 31st of October 1548.

The tomato was widely expected and became part of the Italian culture. It was named pomi di oro or golden apples.

The tomato plant was sown and harvested mostly in the sunny southern part of the peninsula where sun-dried tomatoes originate from.

Ripe tomatoes are harvested, then sliced in half, sprinkled with sea salt, and laid out on mats or cloth under the intense sun until just about all of the moisture is eliminated.

The flavor of sun-dried tomatoes is quite intense, concentrated, and slightly salty, so a little goes a long way.

The Difference Between Dry and Oil-Packed Sun-Dried Tomatoes

Sun-dried tomatoes can be purchased in two different forms.

One form is packed in olive oil and sometimes may include flavorings, such as garlic and herbs. They are sold in jars, either whole tomatoes or large pieces, or julienne style pieces.

The other form is dry packed in airtight plastic bags. In this case they will be prepared with sulfates for color retention, unless you buy organic dry-packed tomatoes.

Dry-packed tomatoes have a texture similar to dried fruit, such as dried apples or apricots.

To reconstitute dry-packed tomatoes, simply place dried tomatoes in a jar, cover them with olive oil and refrigerate for 24 hours. Then use them as called for in your recipe.

Or you can let them soak in warm water for 30 minutes until soft and pliable. Drain and pat dry, and use as directed in your recipe. You can also use wine, broth, or other cooking liquids to reconstitute.

Sun-dried tomatoes add bright color and flavor to any dish you cook it with.

Sun-dried tomatoes can be eaten on their own as a quick snack, though they are used mostly as a condiment. Or added to sauces to top with vegetables or a protein.

Besides using them as a condiment, sun-dried tomatoes can also be used in cooking. Add them when making a strata.

Add them to your scrambled omelet. Like this Scrambled Omelet With Sweet Aji Peppers & Sun-Dried Tomatoes.

When you have sun-dried tomatoes in your kitchen pantry, you will always find some way to use them.

Use them in a crockpot recipe. Like this Crockpot Creamy Tuscan Chicken Thighs.

Make good use of sun-dried tomatoes with this Creamy Sun-Dried Tomato Chicken Gnocchi.

The relatively small amount of sun-dried tomatoes used in this recipe gives a gourmet touch and a burst of flavor.

Sun-dried tomatoes add a burst of color and flavor to anything they touch a main dish, side dish, sauces, and appetizers.

Take your recipe to the next level with flavorful sun-dried tomatoes.