The Pecan & Its Culinary Uses 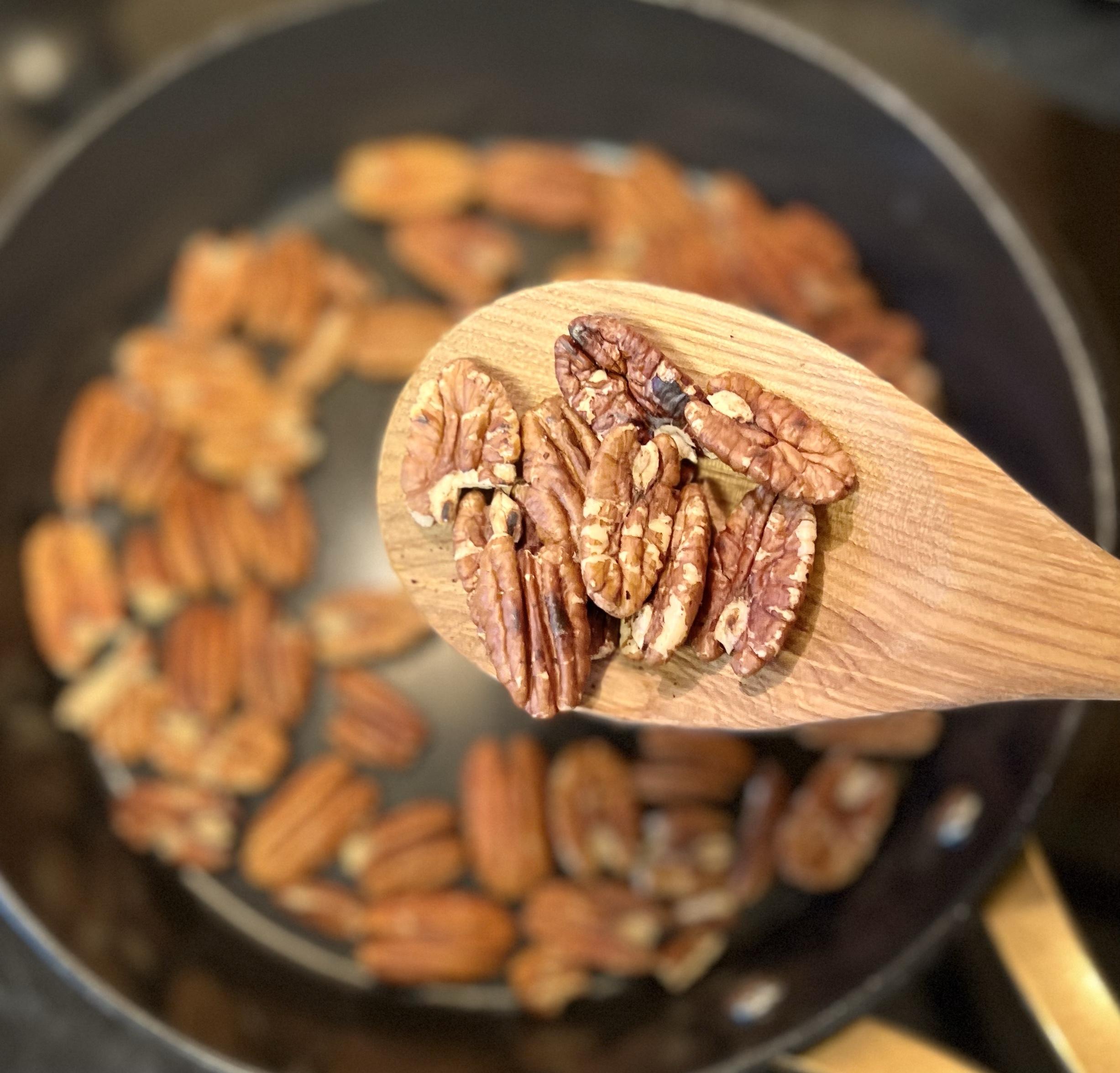 The pecan is a species of hickory native to the southern United States and northern Mexico. The pecan tree is the only tree nut native to North America.

Its sweet, crunchy texture with a rich buttery flavor and unmatched nutritional content have resulted in its growing worldwide popularity.

Origins Of The Pecan

Tracing the pecans origin to the 16th century, the name “pecan” is a Native American word from the Algonquin people, and the word was used to describe “nuts requiring a stone to crack.”

One of the first known cultivated pecan tree plantings was in Northern Mexico by the Spanish colonists and Franciscans. These plantings are documented to around 1711.

By the late 1700’s, pecans from the northern range reached the English portion of the Atlantic Seaboard and were planted in the gardens of easterners such as George Washington (1775) and Thomas Jefferson (1779).

Settlers were also planting pecans in community gardens along the Gulf Coast at the time.

The First Exporting Of Pecans

In the late 1770’s, the French and Spanish colonists settling along the Gulf of Mexico had realized the economic potential of pecans.

And by 1802, the French were exporting pecans to the West Indies. Though some will argue that pecans were first exported by the Spanish colonists in northern Mexico.

By 1805, London advertised the pecan as “a tree meriting attention as a cultivated crop.”

Use Of The Pecan By Native Americans

The natives of pre-colonial central and eastern regions of North America and the river valleys of Mexico used pecans as a major food source as they were readily available.

Even as a wild forage, the fruit of the previous growing season if found on the ground were edible.

Pecans were easier to shell than other North American nut species, and they had excellent taste.

They were even used as currency among Native American peoples for a time.

Native tribes were thought to have used pecans to make a fermented drink called “Powcohicora,” from which the word “hickory” is derived.

The tribes’ reliance on the nut for both nutrition and trade spurred the trees cultivation.

Richer in flavor than other nuts, pecans are prized in the culinary world.

ILovePecans.org displays three educational videos about the uses of pecans in the food industry service.

Chef Chris Koetke was hosted on one of the videos entitled, “Pecans – A Functional Ingredient,” were he explains and shows the many uses of the pecan in the culinary world.

He says pecans can be used in savory dishes, as well as can add texture, act as a binding, thickening or extending agent in seafood, meats, vegetables, and salads among other recipes.

Pecans like other true nuts have starch in them. To use this starch as a thickening agent, the nuts are ground into a flour.

The starch in pecans reacts the same as does corn starch, though it takes longer to thicken when added to the food you wish to thicken. Such as a gravy, soup or stew.

Pecans are traditionally used in desserts. They are sweet, with a nutty, buttery flavor.

They are not only eaten fresh, but are roasted and used in all kinds of desserts. Like this Southern Pecan Pie.

Besides pecan pie they are popular in other desserts. Like praline bars, cookies, banana bread, bread pudding, and even gluten-free desserts.

There are so many deliciously yummy desserts made with pecans.

Here are a few of those recipes for you to download and try.

They are often included in nut mixes and tossed with sugar and spices or coated with honey before being baked as a specialty snack or dessert.

Pecans are also roasted (optional) and chopped (or used whole or pieces) to mix in or garnish pastas, soups, vegetable or rice dishes, like this Sweet Potato Rice Pilaf With Cranberries & Pecans or these Hasselback Maple Pecan Sweet Potatoes.

When the nuts have been roasted and chopped, they are used as well with leafy green salads, fruit salads or a vegetable and fruit salad mix.

In conclusion, here are two interesting facts about pecans.

1. New Mexico State University put out a report in 2021, stating that the pecans commercially grown today shows that the pecan genome has DNA introgressed from 3 different hickory tree varieties.

2. Mexico is the world’s largest pecan producer, and the U.S. comes in second.

Read More Here And Learn The Truth About Cashews – with recipes