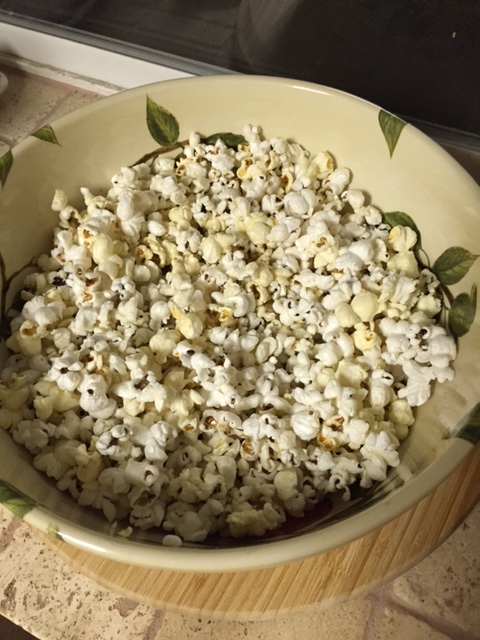 Almost 90 percent of corn harvested in the U.S. is genetically modified.

It is now understood that GMO foods are linked to allergies, tumors and even early death.

The good news though, is the subspecies of corn used in popcorn is not part of that 90 percent and is, as of now, not genetically modified, according to the Institute for Responsible Technology.

So the bagged microwave popcorn is non GMO corn. But do you know what else is in that bag of popcorn you put in the microwave?

It is used as a flavoring in microwave popcorn. It can obliterate the airways, and lungs if exposed to much to the chemical.

It was used in World War I, to do exactly that. Factory works who are exposed to the chemical have irreversible lung damage.

The University of Minnesota reported that the chemical diacetyl, can pass the blood-brain barrier, and weaken the brain’s defenses against the formation of amyloid plaques, causing Alzheimer’s.

Most manufacturer’s  line the microwave popcornbags with perfluorooctanoic acid (PFOA) to keep grease from leaking out.

When the bags are heated, they leach the PFOA into the popcorn.

This chemical is made from butane, a known toxic gas.

Medical studies have reported that just eating 1 gram could cause ADHD in children, asthma, allergies, dermatitis, and dizziness.

It’s been associated with stomach cancer in laboratory animals.

Popping corn in a microwave bag maybe a fast and easy way to get a tasty snack, but it could be dangerous to your health.

Why not buy some colorful organic non-GMO corn kernels and coconut oil and pop your corn on the stove in 5 minutes or less.

From 1/3 cup of organic popcorn kernels, add 4 kernels to heated oil and cover pan with lid. When the kernels pop, remove pan from heat and add the 1/3 cup of kernels to pan in an even layer.

Return lid to pan and count to 30. Return pan to heat and wait for kernels to start popping. Once they do, gently shake pan over heat.

When you no longer hear any popping remove pan from heat and add popcorn to a serving bowl.

Next pour over popcorn and mix in. You can also add Himalayan salt, organic smoked paprika, or organic Parmesan cheese.

Follow this method and every kernel of corn will always pop evenly and not burn, not even the pan.

You can never say that about those chemical filled microwave popcorn bags.