Know Your Herbs – Spices & How To Cook With Them 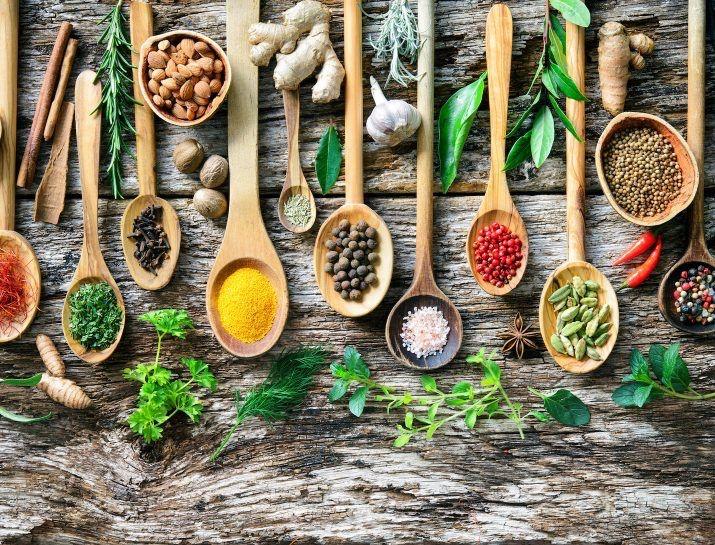 This article will cover the basics of knowing your herbs and spices and how to cook with them.

Herbs and spices are a treasure chest of zesty, sweet, savory and spicy flavors. These flavors fresh or dried impart flavor to any cooked dish or baked good they are used in.

One of the best qualities of herbs and spices is the variety of flavors you can add to foods without adding salt.

Examples of fresh or dried herbs used in recipes include among others: basil, parsley, rosemary, thyme, cilantro, sage and dill weed.

Note that for each of these plants, the herb is the green leafy part.

As for spices they include any other part of the plant, but not including the leaf.

Spices include dried bark (cinnamon), seeds (cardamom), flower buds (cloves), the roots (ginger), dried berries (allspice) and twigs or just about any part of the plant, but again, not including the leaf.

Take note that spices are used in dried form while herbs can be used either fresh or dried.

How To Cook With Herbs & Spices

When a recipe calls for a type of herb, be sure to use it in the form it is called for. Either fresh or dried.

Dried herbs and spices which are particularly resistant to heat and prolonged cooking are typically used in roasting and baking.

Dried herbs are typically add at the beginning of the cooking process so as to impart flavor while cooking.

On the other hand, when herbs are fresh, they are typically added just as the cooking has been completed.

Fresh herbs are more vulnerable to heat. To much exposure to heat will kill the flavors.

Fresh herbs bring brightness and fresh flavor to a recipe. They are used more typically were no cooking or use of heat is involved.

Fresh herbs can be used in salads, to make sauces, like pesto sauce, and dressings or vinaigrette’s.

The most common dried herbs used include: oregano, rosemary, sage, thyme, cumin, bay leaf, cinnamon, allspice and nutmeg among others.

Cinnamon is a common spice used in both cooked and baked dishes.

Where as the most common fresh herbs used are: basil, mint, cilantro, parsley and dill weed.

Other recipes may ask for a teaspoon or two of chopped parsley, cilantro, mint or basil to be sprinkled over the food at the end of cooking to bring some fresh flavor to the dish.

Dried spices can also be used as a garnish such as cinnamon, nutmeg and paprika.

This information is basic, but the idea is herbs and spices (dried or fresh) will significantly elevate the flavor of your dish.

Read more here about How To Spice Things Up When Cooking.