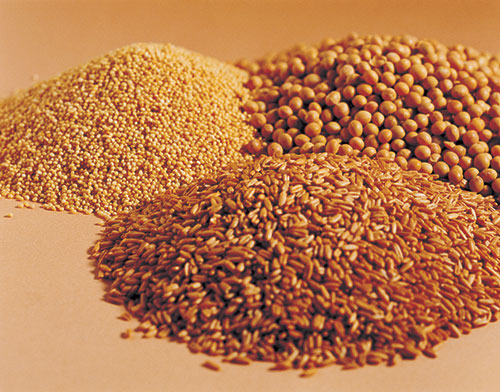 Wheat is one of the world’s most commonly consumed grains.

It comes from a type of grass called Triticum that is grown in numerous varieties worldwide.

Common wheat, the wheat used to make bread, is related to grains which include durum, spelt, emmer, einkorn, and Khorasan wheat.

For some individuals, wheat can trigger a harmful immune response as is it contains a protein called gluten.

Gluten is a family of proteins found in grains, including wheat, rye, spelt, and barley.

Of the gluten-containing grains, wheat is by far the most common.

The two main proteins in gluten are glutenin and gliadin. Gliadin is responsible for most of the adverse health effects of gluten (Source: National Center for Biotechnology Information).

If you are one of the individuals who is bothered by gluten, you will be happy to know there are gluten-free or wheat free alternatives.

If you have already taken on the wheat-free lifestyle, you may have discovered the wide variety of wheat free grains to choose from.

Each with its unique flavor and baking properties.

All of the following alternatives to wheat are healthy swaps in your favorite breads, pastas and side dish recipes.

alternative flour used in muffins, pancakes and bread, it can be prepared as a hot cereal, added to soups or use as a salad topping.

Quinoa contains all the essential amino acids, making it a complete protein source.

Quinoa’s texture is crunchy and has a nutty flavor.

This seed has a nutty flavor. They need to be fresh ground to get the most nutritional value from them.

Though they can be toasted whole first than ground for later use, but with less nutritional value.

Golden flaxseeds are lighter in color and have a milder or more neutral flavor, while the brown flaxseeds have more of a nutty flavor.

They can be added to salads, cereal and when baking bread.

Though it may sound like it, buckwheat is not a member of the wheat family and it isn’t technically a grain, but it’s often used in place of grains.

It’s a good alternative for those with wheat allergies.

The most common or traditional use of this flour is making Buckwheat Pancakes.

Amaranth is a broad-leafed, bushy plant that grows about six feet tall. It has brightly colored flowers that can contain up to 60,000 seeds. The seeds are nutritious and are ground into flour.

Not a true grain, amaranth is often called a pseudo-grain, which are seeds but have grain-like characteristics.

Amaranth belongs to the plant family that includes beets, chard, spinach among other eatable sources.

Oat flour is another great wheat alternative. Oat flour has a good amount of protein and fiber, plus a tender texture and mild taste. It can be use it in recipes that include pancakes, protein bars, and cookies.

When using oats as an alternative to wheat, be sure to select gluten-free oats.

These are specially-selected varieties that have eliminated the cross-contamination with wheat, barley and rye.

There is also Almond flour, which is versatile and easy to work with.

Use almond flour in place of breadcrumbs for breading fish or meat. You can also swap it for white flour in baked goods such as brownies.

Coconut flour though is not good flour to use entirely by itself, as it bakes very differently from white flour and other flour substitutes.

Coconut flour absorbs a lot of moisture and yields a denser, heavier texture out come.

It requires more eggs or wet ingredients to perform.

This flour alternative is ideal for quick breads with lots of wet ingredients, such as banana bread.

There is also chickpea flour (made from beans), as well as tiff flour and millet flour among many others.

Alternative wheat flours are not cheap, so you want to make sure you store them correctly.

It is best to them in the freezer to prevent them from going rancid.

You can store the flours in their original packaging, or in freezer safe containers.

Each alternative flour has its own unique flavor and can be used in many different ways to add variety to your cooking and baking.

What Others are Saying About Wheat Free Alternatives: