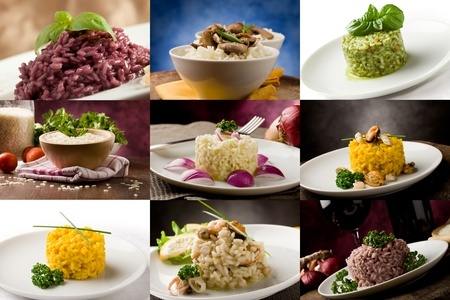 When it comes to Italian comfort food, you might immediately think of pasta.

Although pasta is a big part of Italian cuisine, in northern Italy another dish reigns supreme.

What dish is it? Risotto. It is one of the most common ways of cooking rice in Italy.

Though Risotto is not rice, but rather a particular dish made with rice.

The broth can be derived from meat, fish, or vegetables.

The Rice Used To Prepare Risotto

It is the rice that makes this dish. What rice is it?

Without exception, Risotto is made from one or more of the following semi-fino rice varieties: Arborio, Baldo, Carnaroli, Maratelli, and Vialone Nano.

All of these rices have the ability to absorb liquids without over cooking.

The History of Risotto

The story of risotto begins in the 14th century B.C. with the Arabs bringing rice to Sicily and Spain during their rule.

Italy was the ideal place to grow short-grain rice due to the humid weather and abundant flat land.

Till today, the Po Valley (Italy) is one of the largest rice producers in Europe and rice is eaten extensively throughout northern Italy.

How To Cook Risotto

Before adding any liquid to your rice, sauté the rice in a few tablespoons of olive oil or butter in a hot skillet. This brings out the nutty flavors as it toasts in the oil.

Add hot liquid—whether it be vegetable stock or chicken stock—to the toasted rice so that the starch in the rice is released slowly and cooks evenly.

Add only ½ cup to one cup of liquid at a time, which will prevent the starches from being released all at once.

Only ladle in more stoke once the rice has fully absorbed all of the liquid in the pan.

Repeat this until the rice is creamy and al dente.

Though risotto is different than cooking long-grain rice, it’s no more time-consuming than preparing regular rice. It does though require more hands-on cooking.

When cooking risotto, stir frequently but not constantly. Over-stirring can cause too much of the starch to be released at one time, whereas not stirring enough can cause the rice to stick to the bottom of the pan.

Keep the pan over medium heat to encourage the starches to release slowly.

Add 1/2 cup of cheese at the very end of the cooking process as this helps amp up the creaminess of the dish, and can add a salty, umami flavor.

Lastly, season the risotto to taste with adding toppings. Such as torn basil, parsley, cilantro, lemon zest and goat cheese.

What Others are Saying About Risotto: